View this group on Goodreads »
Share book reviews and ratings with Indie Book Collective, and even join a book club on Goodreads.
I made a surprising discovery about my eyes today. I recently acquired a bicycle,and I’ve been looking for a helmet – not so easy for me,as I have a huge skull,leaving my paltry brain to rattle around a bit. I thought that I’d increase my safety by attaching a mirror to the helmet,when I buy one. I already have one on the end of the handlebar,but another could be useful. As always,I research things and discovered that one is supposed to attach such mirrors to the side of the helmet for your dominant eye. This is because it will pick up on any movement in the mirror without effort. I’m right-handed and right-footed,though I try to be as ambidextrous as possible by using my left hand to do many things – the better to stimulate dormant parts of my brain.

I naturally assumed that I was right-eyed too,as I’ve favoured that for doing things such as aiming when playing pool,throwing darts or firing a catapult or gun. I did the test below,and was astonished to find that I’m left-eyed ! I wonder how many people know their dominant eye ? About a third of folk are left-eyed,but it would feel weird for me to have a mirror on the left hand side of a helmet – but the handlebar mirror is on the right,so perhaps it would make my view of what’s behind me more complete.
The only way this would affect me in a strange way is if I fire a rifle,which I’d have to hold in a left-handed stance to get the best aim. In any other aiming activity,I could just shift which eye I use.
I worried about this anomaly and what it could mean. Other than one eye leading the other,in the same way that feet and hands do,it’s of no great significance.
The difference is,one isn’t so aware of how one eye dominates the other. It seems to be of particular interest to sports people and the military where aiming and control are of paramount importance.
Those spooky night sights that soldiers wear would presumably be more effective if worn over the stronger eye. Or perhaps the weaker,as it would leave the dominant eye to pick up movement around the combatant.

I think that combat pilots would need to know which their dominant eye was,as they have the distraction of a heads-up-display which shines information onto their helmet visor. 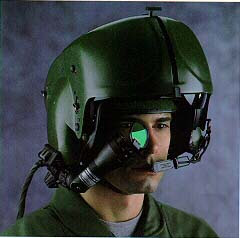 I’m wondering what else I’m going to find out about my ageing body,before it conks out…